Corniglia is a frazione (“fraction”) of the comune of Vernazza in the province of La Spezia, Liguria, northern Italy.
Unlike the other localities of the Cinque Terre, Corniglia is not directly adjacent to the sea.

Instead, it is on the top of a promontory about 100 metres high, surrounded on three sides by vineyards and terraces and the fourth side descends steeply to the sea.

To reach Corniglia, it is necessary to climb the Lardarina, a long brick flight of steps composed of 33 flights with 382 steps or, otherwise follow a vehicular road that, from the station, leads to the village.
Sometimes a small bus runs up and down here.

The village stretches along the main road, Fieschi Road, and the houses have one side facing this road and the other facing the sea.

Corniglia is characterised by narrow roads and a terrace obtained in the rock from which all other four Cinque Terre’s villages, two on one side and two on the other, can be seen.
The town planning structure presents also original characteristics compared to those of the other villages: the houses are lower set, and only more recently higher, similar to those of the villages of the hinterland.

Corniglia is mentioned in a famous novella of Giovanni Boccaccio’s Decameron and in the novel The Invisible Circus by Jennifer Egan.
Documents dating from 1276-77 mention the existence of a castle.
However, remains of the castle have yet to be discovered and the location of the castle grounds is unknown.
The only ruins in Corniglia belong to Genoese fortifications, a stronghold on a cliff plunging into the sea, which dates back to approximately 1556. 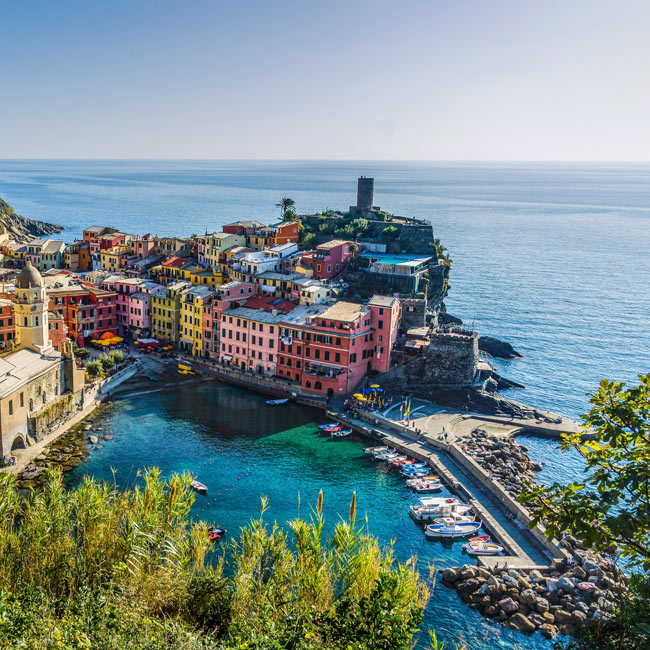